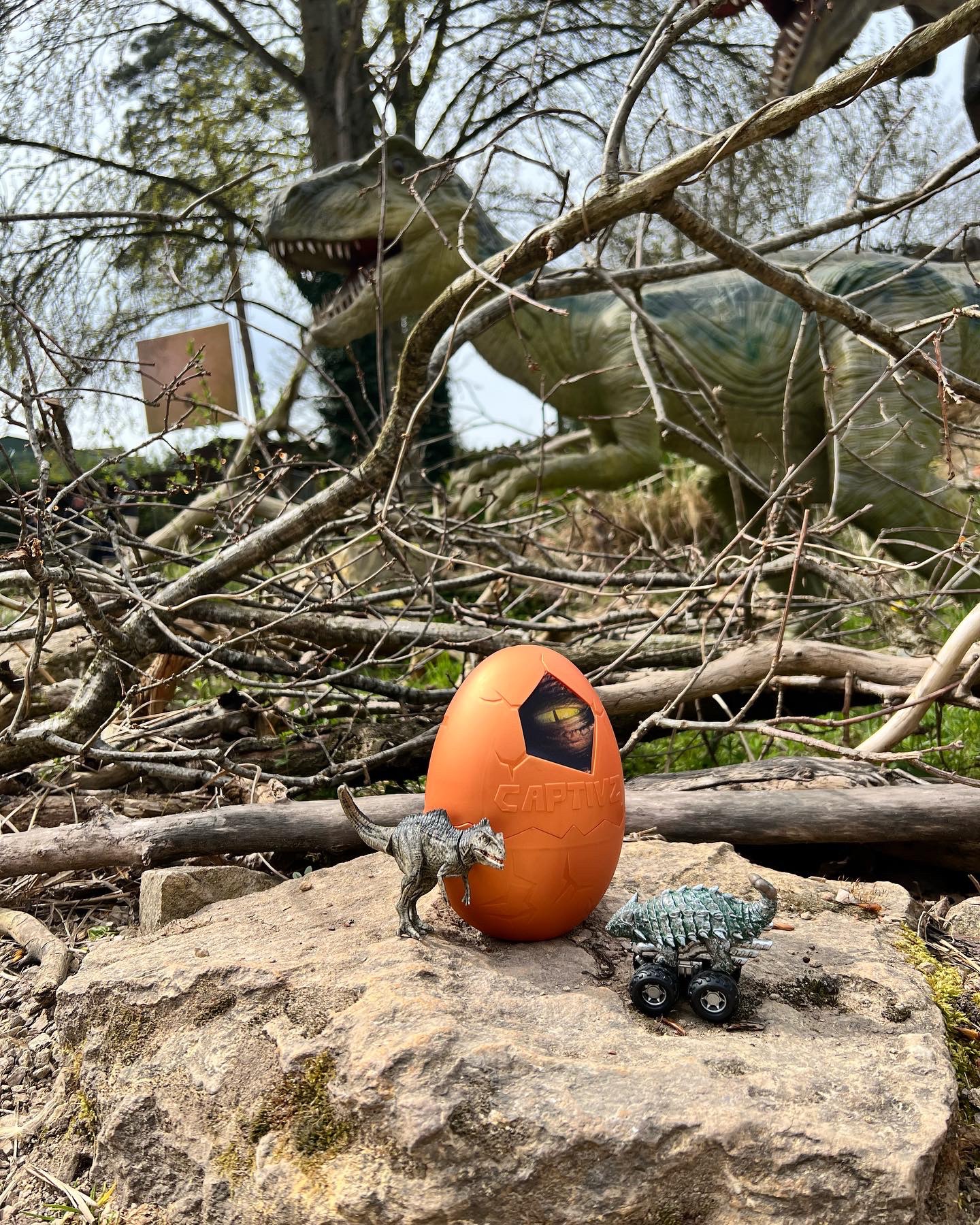 What a fabulous surprise to receive instead of chocolate this Easter! The Jurassic World Dominion Captivz Eggs surprise dinosaur toys are a fabulous new release from Character Toys in anticipation of the movie release later this year.

These eggs contain collectible pop and lock dinosaur pieces and all sorts of other fun treats for little ones including slime, kinetic sand and more. There’s a variety of different sized eggs available at different price points and featuring different items and we were sent out a surprise parcel to investigate and share with you all.

The smallest egg from the Jurassic World Dominion Captivz range retails at £4.99 available at Smyths. These are ideal for pocket money treats or birthday gifts. You peel back two layers of packaging to reveal a black plastic egg which cracks in half to reveal the content. A bag of sapphire blue slime, a battle token and three pieces of dinosaur to assemble. The pop n lock dinosaurs add an extra layer of construction fun which is great fun. There are fourteen different dinosaurs to collect within the Captivz range including two ultra rare dinosaurs and more to come. Each dinosaur has its own silver seal of authenticity too.

The slime is fabulous – it comes in little pouches and is the brightest blue colour and it’s got a great texture – not too sticky but with a good stretch on it. Arlo liked pouring his in and out of the egg shells , hiding the dinosaurs and creating an azure coloured swamp for them.

Within each egg we opened was a leaflet and battle tokens. Each dinosaur has their own descriptors and when we opened another of the eggs we found a game board which explained exactly how to use them – each dinosaur has different features and so you can battle them in a style kids will be familiar with to see which one comes out on top.

The biggest Egg in the collection retails at £24.99 from Smyths Toys. This egg was packed full to the brim with two bags of slime, three battle tokens, a sticker sheet, the game mat and dice, THREE pop n lock dinosaurs with battle tokens and a pull back Dino vehicle. Plus two black eggs, the leaflet guide and the backpack case This egg was by far the favourite with so many different items included. Arlo wanted to use this huge bright orange egg to store everything and display in his bedroom. Our ankylosaurus car has been all over with us this school holiday including the dino exhibition at the safari park and is now one of his prized vehicles.

The backpack case has been a real hit with Arlo too. He’s used this to store all of his battle tokens and clipped it to his bag as soon as he realised he could. Then of course he stuffed his bag full with all of his dinosaurs and insisted that we head out to a dinosaur land to play. He popped all his dinosaurs in to the medium sized Dino dig egg and stashed this in his backpack along with a classic egg stuffed with the kinetic sand. I did have to draw the line at the slime – this is stored safely at home. Over the holidays these have been everywhere with us, he will happily play with them at a restaurant table whilst waiting for food or explore a sandpit with them inventing his own dominion style small world play.

These large eggs feature a holographic dinosaur eye on the outside and are about 17cm high. Retailing at £12.99 from Smyths Toys. These contain three dinosaur parts to find me and are a sensory tray delight as they come with a sachet of the blue slime, kinetic sand AND some amber gel which is a totally different texture. This is an egg which should be opened with caution – I provided Arlo with a tinker tray for play and this kept him busy for quite a while. There was a different part in the slime, sand and gel to find and assemble .

There are three of these to collect and assemble right now and the promise that there will be another three dinosaurs added to the range later this year. The gigantosaurus looks fierce and so I can’t wait to meet the others!

Arlo then enjoyed using the smaller eggs from the range to hide the slime and amber gel with other dinosaurs and making his own swamp of sorts, and has also been taking these out and about with us too. A great small world play idea. We almost missed the sticker sheets because we were so busy having fun – in fact it was just before bedtime when we turned off the lights in the playroom that we spotted these because they glow in the dark!

It took us a while to get through all of the packaging, great fun for Arlo but leaving me with lots of plastic to discard. This is perhaps the only downside to the collection. The eggs themselves have been saved and reused several times already. The largest egg is great for storage whilst the smaller eggs have been played with repeatedly this school holiday – I even used them to hide treats during our Easter egg hunt. Our favourite was the Dino dig egg because of the sensory experience and having to work to find all of the pieces.

Each of the dinosaurs is stamped with the silver seal of authenticity and there are forty to collect. They’re hyper realistic with great attention to detail on the paint work and shaped well to see muscle tone and bulging veins. With several never heard of before dinosaurs included in this range I’m really looking forward to seeing the movie and hope to catch a glimpse of them all. June 10th promises to deliver a movie which will appeal to new and old fans featuring an ensemble cast of original Park characters and the much loved newbies from Jurassic World.

We received four eggs, featuring eight different dinosaurs and only got one repeated character which was pretty good going. Arlo uses them more for play and isn’t worried about collections and having repeats but with 14 of the smaller pop n lock dinosaurs to collect in surprise style packaging it might be challenging to collect them all, especially the rare ones.