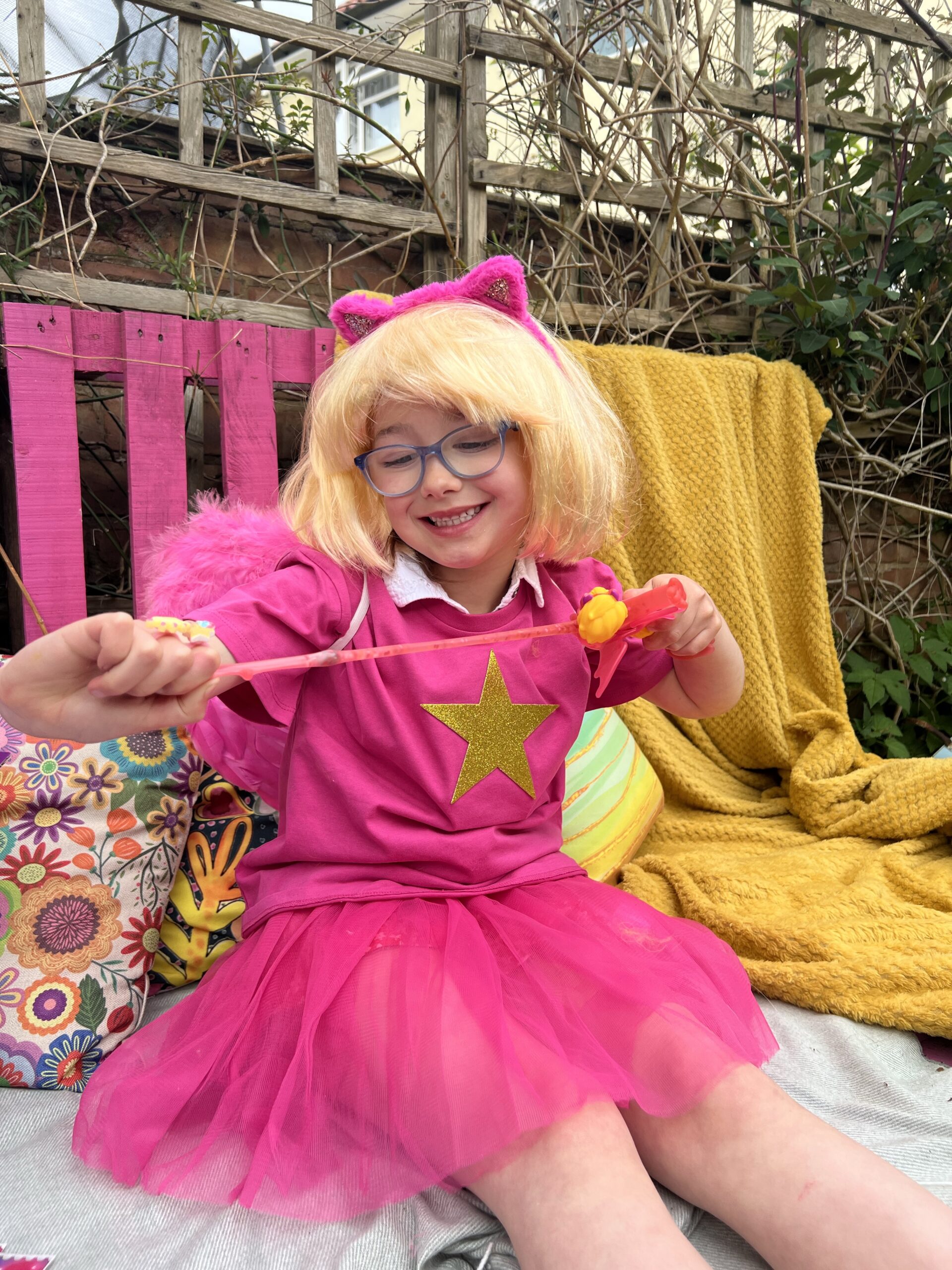 A brand new toy range released this month from the makers of the phenomenal Goo Jit Zu brand. Just like their counterparts these new goozonians are a sensory delight. Developed with kids aged four to six in mind these are not purely for one gender, but there’s a definite feminine vibe here as it was very clear the original brand was a big hit with both boys and girls. Paloma was delighted to see more female superheroes in the world!

Leveraging the Worldwide success of stretchy, squishy, crunchy tactile toys, Character are developing an innovative new concept for the collectable dolls aisle! Launching globally May 2022. For girls aged 4-6 who love fantasy storytelling, action and adventure! The launch collection consists of 6 GooZonian Heroes and a special Twin Pack with exclusive fillings for Queen Ember and Princess Flik

We were super excited to be included in the launch, Paloma opened a special delivery which included early access to the YouTube channel from CharacterKidz which introduced all of the characters and their back story. GooZonian toys bring together a captivating play pattern and mythical creatures, with a great story behind them that promotes the value of friendship and teamwork as the characters embark on a quest to save the day.

There are six different characters to collect in series one. Each has their own unique power and individual personalities and characteristics making them relatable to all. Being on their own journey of self discovery is both exciting and inspirational. The six characters are available individually and there is a special twin pack with exclusive fillings for Queen Ember and Flick.

As the Goozonians story goes….

Many generations ago, a strange force of nature, known as the Stone Heart, turned the goo dull and hardened it throughout the land and in the hearts of the people. It caused natural disasters and a lot of hurt feelings. To save her people, Queen Cinder infused the last of the flowing goo with an ancient magic to create six powerful charms.

These charms gave the GooZonians the power to narrowly defeat the Stone Heart and reverse its effects. Fearing that the temptation of using these charms for ill would be too great for some, Cinder hid them across the land. Now the Stone Heart has returned and Cinder’s great-great-great-great granddaughters Queen Ember and Princess Flik must find the charms to defeat it and protect GooZonia from the ApoGoolypse!

As part of the campaign we were sent two of the Goozonian dolls, Cora and Queen Ember in individual packs.

The perfect fit for Paloma. She ripped open the packaging for Cora first and with her matching outfit she immersed herself right in the middle of the story and offered to share the second doll with Arlo so they could play together.

• A singing, dancing, acting triple threat, she’s the Artistic Director of the Royal Performance Company. She keeps the girls entertained when they need a break from studies and Stone Heart missions.
• Filled with small hexagonal sparkles in pink and orange stretchy glucose.
• Key Traits: Enthusiastic, Creative, Opinionated but Overconfident.

Arlo thought at first glance that Ember resembled a chicken. Learning all about the mythical Phoenix was an enlightening conversation. Paloma showed Arlo how to stretch and squeeze the doll to reveal glitter shapes inside.

• Ember is the latest in a long line of Phoenixes to lead the good people of GooZonia.
• Filled with flame effect strands, star shaped sparkles combined with red, orange and yellow flecks of swirling shimmer.
• Key Traits: Brave, Charismatic, Dutiful but Critical.

Comparing the two dolls together you can feel how strong the stretchy rubber is. These kids certainly put the stretch to the test and found it hilarious to see the animated characters with outstretched arms at key moments in the cartoon. As they stretched the dolls it became apparent that there was extra sparkle hidden amongst the goo.

The kids spent a lot of time comparing the inner contents and swapping the dolls to see what shapes and colours of glitter they could see. You have to really give them a good stretch to find hidden charms inside their bodies and this makes for some great sensory fun. We found we could see water beads beneath the surface of one of the dolls and more of a goo like substance in the other. They do always spring right back to their original form which is great as I was expecting some distortion.

The heads of the dolls are hard plastic which is great on the one hand as they have great detailed features – BUT and this is a big BUT…. You do have to be careful as if play gets a bit energetic then these dolls can be catapulted so be careful with that.

Their outfits can be swapped. They’re made from a different material to the dolls bodies and as they’re all the same size you can create different outfit combinations. Paloma and Arlo just wanted to whip these off to see if they could get a longer stretch but we did come back to these later.

The only thing I will say is that the surface texture of these dolls is the kind which attracts dust. After a day or two of play inside and outside the house they did get a little bit dull but I tested one in a little bit of washing up liquid to restore it to glory.

The Goozonians have just been released and you can find them at Smyths Toys Superstores now. You can watch the webisode on Character Kidz TV YouTube Channel.

Here’s some information about the rest of the collectibles:

• Roxy is the Royal Spokesperson and heads up the castle’s social committee. Which is to say, she is the life of the party in GooZonia.
• Filled with silver snowflakes and shimmering blue stars within stretchy glucose filling.
• Key Traits: Glamorous, Naïve, Generous but Superficial.

• Isla is an avid surfer and animal lover. Hailing from a small village on the Bay of Shimmer Slime, she’s the most environmentally aware GooZonian.
• Filled with purple moon and star shaped sparkles and clear water beads.
• Key Traits: Easy Going, Independent, Optimistic but Forgetful.

• Glyde is a shy, enigmatic introvert who loves to puzzle out problems and strategize ways to stop the Stone Heart.

• Filled with a mix of pink and purple water beads and a dragon scale effect with added pink sparkle dust suspended inside.
• Key Traits: Shy, Inventive, Passionate but Insecure.