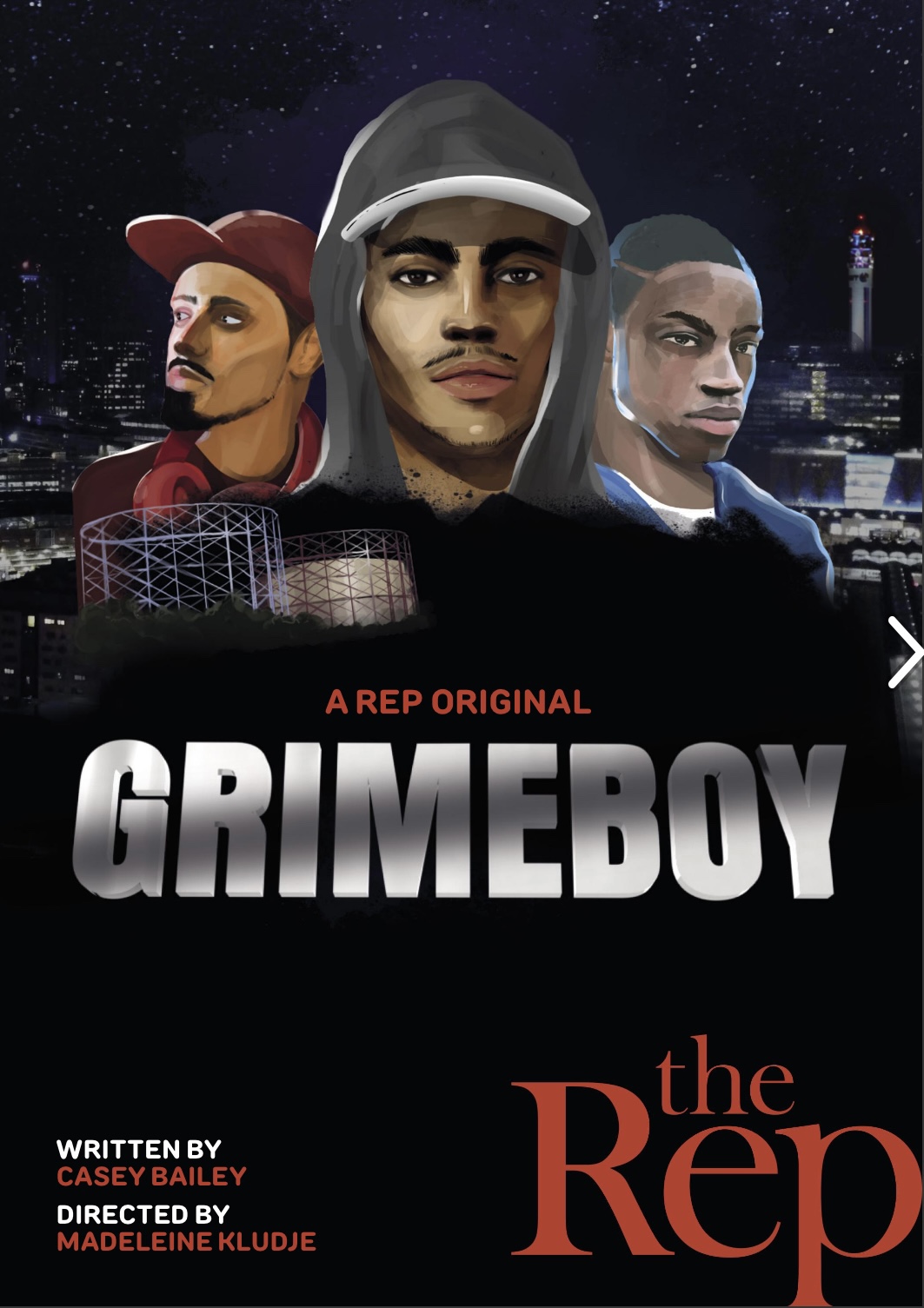 Picture the scene…. Twenty years ago in the midst of an inner city council estate a new genre of music was inspiring a forsaken generation. As I entered the audience to see the latest new play from Caisey Bailey (the poet laureate) I was somewhat disorientated. The audience has to weave through a dark corridor shadowed by curtains to be greeted by a DJ (Auden Allen) warming up the crowd.

Not quite like heading to the eighteenth floor of a council flat but this entrance, different to the norm and the intimacy of the audience size and the simple speaker props on a sparse set helped transport me back to my raving days. With familiar tracks being played as every seat for the sell out show was gradually filled I was excited to see what this new show would bring. Bailey was winner of the Greater Birmingham Future Face of Arts and Culture 2020. Directed by The Rep’s Associate Director Madeleine Kludje with set design by Ebrahim Nazier.

Now in 2022 we have experienced the social media sensation of the Black Lives Matter Campaign. The U.K. music scene is world renowned with performers such as Stormzy and Dave following in the footsteps of the paths originally paved by Dizzee Rascal and Kano. We see Top Boy trending on Netflix as the world is becoming more aware of the talent coming from sprawling inner city estates and the unique challenges faced by those born in to this environment. Everyone dreams of success.

Yet some things never change. People look at “hoodie wearing youths” and are quick to judge. Jump to conclusions. Grime Boy explores public attitudes to young black men. We follow a talented young boy, “Blue” (Alexander Lobo Moreno) from the onset of the performance. As he bursts in to the first scene to battle our leading Grime Boy whom has already over won the crowd with his rhyming quick wit, we aren’t quite sure what to make of this character from his initial aggressive challenge.

Very quickly we realise that not all is what it seems. Blue exposes his vulnerability to us through his interactions with Grime Boy who becomes his battle partner and mentor. Grime Boy recognises Blue’s ability and begins to encourage him to choose a sensible path and focus on his music to escape the complexities of just happening to be born in to an unequal world, one in which you’re reputation is everything. Each, we are led to believe is deserving of success.

What happens next is an emotional rollercoaster. With the nostalgic grime tracks providing the musical backdrop, and excellent comic timing from the ensemble cast we are quickly endeared to Blue and Grime Boy. Despite learning more about each character. Their combined talent makes us yearn for success. At one point I was wondering if the story would flip on us and it would be Blue who overtook Grime Boy to be the breakout star and find fame and fortune. How he might have to choose to leave his mentor behind if given the opportunity of a lifetime. A betrayal of sorts which would create the story climax.

Sadly this was not the case. In a cruel twist of fate, which is sadly a story all too familiar, we see a young life lost to knife crime for no apparent reason. The same stage props which has just a few moments prior created a house party, provided soap boxes for a rap battle and speakers emitting heavy bass music suddenly transported us. A hospital with a flatlining heartbeat monitor and then eventually in to a deserted graveyard.

The uplifting atmosphere created through the performance suddenly closed in on us all. We went from being active members of a live music show, to becoming an audience watching in horror and holding our breath to see how our protagonist would react. Ultimately it’s living these experiences which is the driver for success, but it’s a story which our protagonist doesn’t feel ready to share until years later.

The performance ends as though we are again at the live show, after Grime Boy has found his success and finally had the opportunity to tell his story. As the final bar was completed the audience was on their feet to give the performers a much deserved standing ovation.

Grime Boy is raw and it is real. The story telling remains true to its genre throughout, with Baileys talent for writing shining through in the lyrical content of this performance and each member of the cast taking the opportunity to shine in their own right. It certainly does meet its aim to raise more questions than it answers.