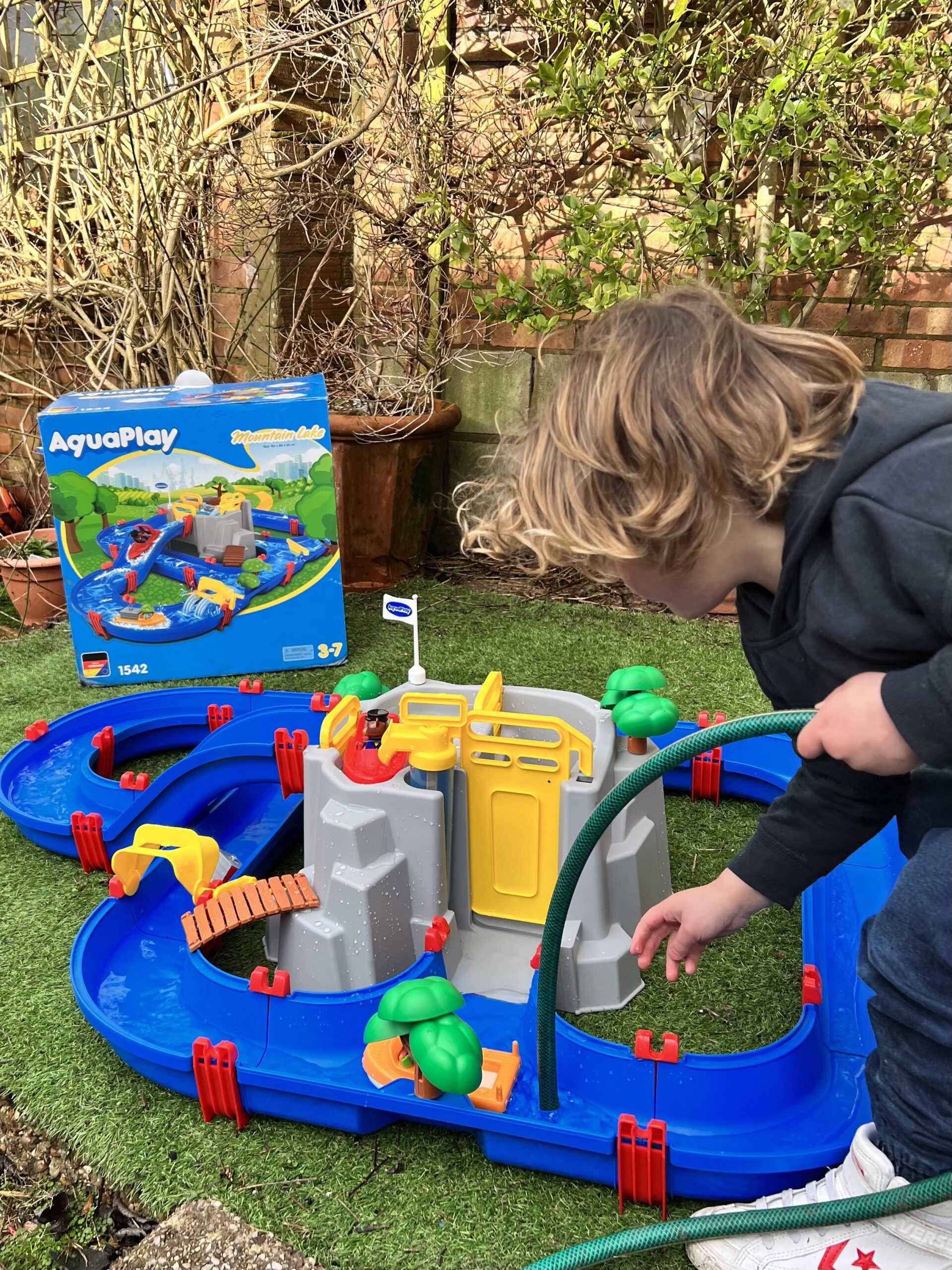 Did you know Birmingham has more canals than Venice? It’s true!! There’s some lovely places to explore in and around our city via the canal system and Arlo is obsessed with the idea of opening a canal lock. One other thing this four year old is constantly engaged with is play – and water is the easiest resource to provide. This Smoby Aqua Play Mountain Lake set is great…. Once you have set it all up!

We often share tuff tray activities and messy play activities, but some parents say that it’s not for them and they hate the cleaning up – using water is the best way to give kids access to sensory play, and toys like this really do keep them busy for hours because there’s so many different things to experiment with and problem solve.

The huge box arrived via courier – an extremely prompt delivery. Arlo could immediately see from the packaging what was inside, so insisted on opening it there and then. We hauled the box out to the back garden and set to work. The box was full of parts but because Arlo enjoys construction we made this part of the play process. If you’re familiar with Smoby you’ll know that the effort of setting up is worth it, but don’t just take my word for it. Amy from Mothering a Rainbow shared her recent experience with the Smoby Sweet Corner and agrees. The hardest thing is keeping the kids out!

It took me a while to build, so if you’re planning this in as a birthday gift it’s certainly one to set up the night before and allocate about an hour for. There are simple instructions and the set can be built in a variety of different ways but you have to get it right to complete the canal system.

The most important part of setting up this Smoby Aquaplay system is getting the seals right, they need to be in situ in order for all of the connections to be water tight and it can be fiddly/tricky at first but you do get the hang of it as there’s quite a few to prepare. Then it’s a case of snapping all of the bigger pieces together.

The black strips stick to the inside of each red part – it takes two for each one. I just got the hangof it by the time they were all done. Then the red bits have a bit of a knack to them – you almost feel like you’re squeezing too much to snap them in place but it makes for a really tight seal which is worth all of the effort. We copied the exact shape which was on the box. We did attempt to get creative but didn’t find a network which would work with all the pieces and really wanted to get water flowing.

The system, once complete was much bigger than I expected and also fairly sturdy. It’s one of those toys you can keep in the garden and not worry about dismantling after every use as it is sturdy enough, but equally you can also use this inside and set up with a towel nearby for splashes.

There were a few little bits which Arlo enjoyed building including adding the trees, flag and little bridges and gates, and before I could stop him he was running for the garden hose to add the water. As soon as he realised that the water levels changed when he opened the gates he was enthralled. The opening of these created waterfalls and mini log flumes.

All of the gates are really easy to open, with bright yellow colour coding to know these pieces can be moved, it’s not clear how they operate but it’s intuitive to know that they will do something. The biggest lock creates the most wonderful outpouring of water and the biggest splashes, just like when you open a real canal lock.

What canal system would be complete without a boat?

There’s a hippo and a frog character who both sit inside little boats, one with some cargo on board. These boats bob around the canal system and as soon as he spotted these Arlo began creating his own little voices and scenario because there’s a crane which helps you to load/unload the boats.

At the top of the system is a water pump, this helps you to distribute the water around the canals and change the levels. This concept was something Arlo could not understand at first, but after a couple of repeats he quickly understood that the water levels would have to change for the boats and characters to complete another circuit and that the pump was the way to do this

This is a great way to begin to understand cause and effect. Linking different systems is such a difficult concept to grasp and this toy set really is a creative solution for children to make those connections through play.

I did dismantle this because we have had some stormy weather of late and it took just a couple of minutes to deconstruct. The setting up process is much quicker the second time because the seals are in-situ. I did try to repack everything in to the original box but this proved to be a tough challenge and so I’m storing it in a larger tote box in the shed for now and plan to bring this out as soon as we get