This morning we woke up at a ridiculous hour (even earlier than usual) because of the clocks going backwards. Despite my best efforts to stay in bed for a lovely Sunday lie in – it wasn’t going to happen.

By 9am we had had breakfast with dinosaurs, done lots of stickers and stamping and we had read “we’re going on a bear hunt” a dozen times – with lots of songs and actions.

At some point in my sleepy haze I remembered that a flyer had popped through the letter box about a theatre production at The MAC – and so I checked ticket availability online, packed up our bags and we decided to go on a real bear hunt.

Parking for the Mac is plentiful, it’s the same car park for Cannon Hill Park, and is neighbouring the old Nature Centre. I use the parking app’s and there’s a reasonable charge of Â£2.81 for four hours. 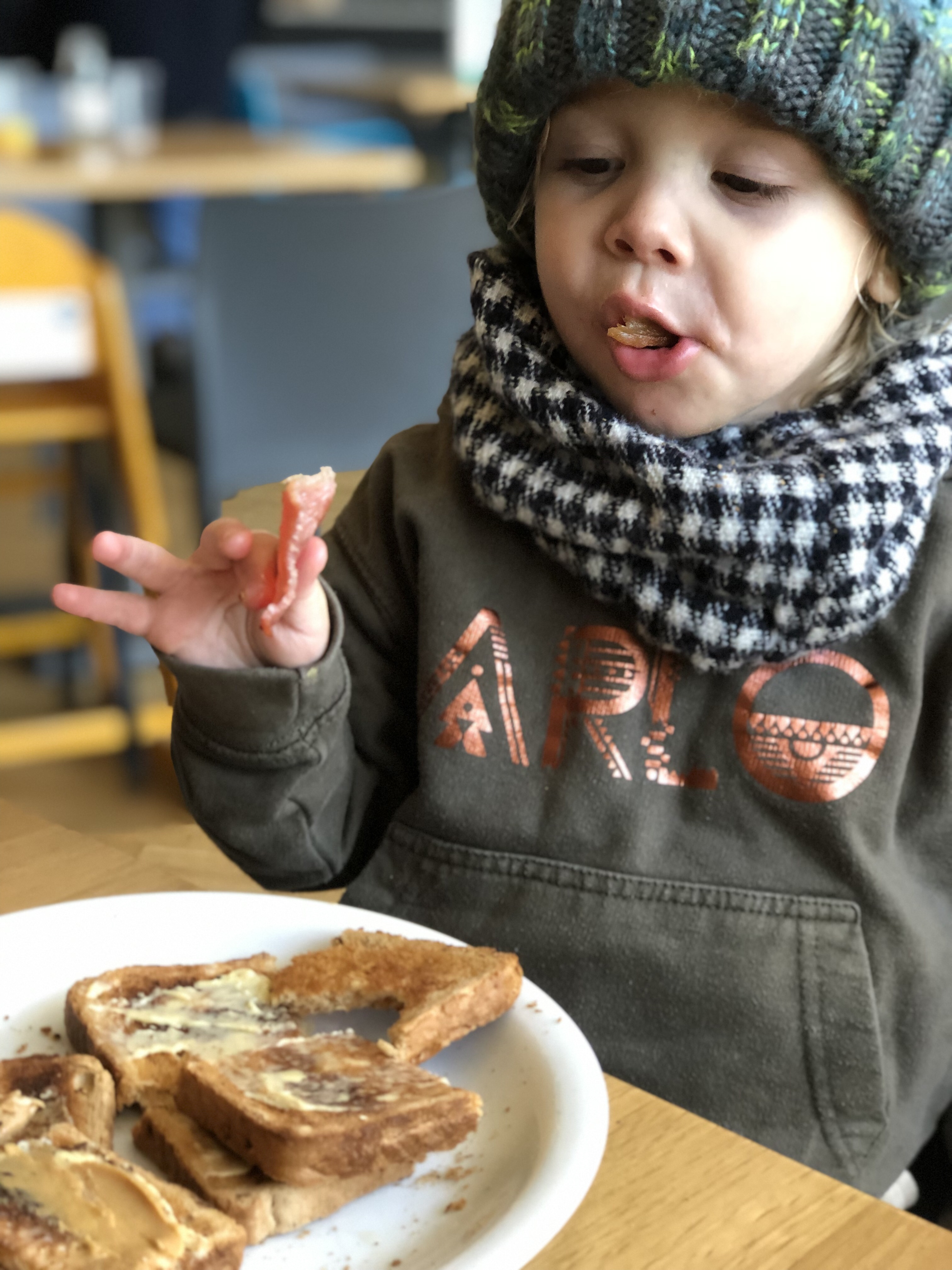 We arrived early, purchased our tickets from the reception/shop area and had time for a second breakfast in the cafe. It was packed but we managed to place our order efficiently, find a table and our food was served in ten minutes – we munched our toast before we heard the sound system give a five minute warning for performance time.

We clambered up the stairs and into the Foyle theatre which is a lovely small theatre with padded bench style seats which were surprisingly comfortable. The seating was unallocated but despite being second row from the back, as it’s such an intimate space this wasn’t an issue. You don’t need to rush to get a good seat and then keep a child occupied for a long time, unless of course you’re in a large group and wish to sit together.

The lights dimmed, and four actors marched in to the room chanting the familiar “we’re going on a bear hunt” rhythm and as soon as they did Arlo was transfixed.

I won’t give you much detail about the performance itself but suffice to say it was a mesmerising show, and truly captured the spirit of the story. The puppets were beautiful and operated in a really unique style which portrayed realistic movement – if you like spoilers then you can check out the official YouTube channel – there’s no filming/photography allowed during the show.

The addition of music was lovely, and delighted Arlo, and when eventually the bear was discovered, it was fabulous to have him bought around to greet everyone in the audience with a roar.

The 45 minutes passed by quickly and I was surprised at how well behaved Arlo was during the whole performance. Being child friendly there was no problem with him loudly roaring and pointing out the different animals which appeared – in fact at a couple of stages audience participation was required and encouraged.

Little Angel Theatre productions are based in London but have various touring shows so check the website as there might be an opportunity to catch a show near you!

I now feel confident that we can go and enjoy more experiences like this together, at Â£13/Â£15 per ticket I was reluctant to book ahead originally as it’s hard to predict what kind of mood Arlo will be in, but I no longer have this qualm and am going to make sure I book dates for future events in advance as I’m sure they will sell out. I have no doubts Arlo will share my love of theatre and the performing arts in the future.

We used the changing facilities at the MAC which are always spotless before heading out to walk around the duck pond in the park as we still had plenty of time on the parking meter – and Arlo was happy to chant “we’re going on a bear hunt” and roar at some passers by with delight! Despite visiting Cannon Hill park regularly since I was a child, it always surprises me at how such a beautiful place can exist in the middle of our busy city. If you are visiting it’s a lovely escape from the hustle and bustle, and worth checking the “what’s on” guide.